This is a concept for a hybrid EHV/HSR (extra-high-voltage high-speed-rail) network, proposed to utility planners, executives, and the electric power industry generally. It proposes a framework for a mutually beneficial solution between the utility and advanced transportation industries to address yawning needs for infrastructure investment and development, in order to propel American society into the 21st Century through improved access to mobility and sustainable energy. 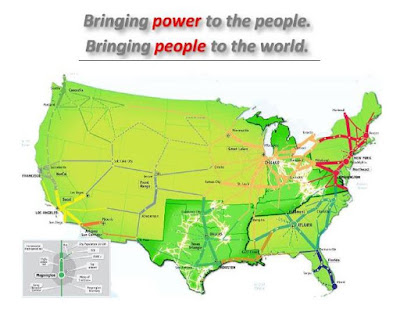 There is a vast need throughout Canada and the developed world to not only maintain but modernize its aging infrastructure networks. Investment and maintenance of transport throughout most Western societies have suffered sustained decline over the past 40+ years, even before accounting for austerity measures imposed after 2008 that further curtail residual support for these systems.

Things weren’t always this way. As World War II ended, war veterans, families, and industries returned home to refocus economic activities towards growing domestic production again. During this era, the US federal government – in collaboration with automakers and oil producers, and championed by the President Dwight D. Eisenhower himself – aggressively pursued development of an expansive national interstate highway system, all while automobiles proliferated throughout the land. Mass-produced, affordable, and growing in popularity, automobiles were purchased by consumers of a growing “middle-class” that would fundamentally alter the infrastructure, landscape, and culture all around this “Greatest Generation.”

Meanwhile, as this growing web of interstate highways effectively cut straight into the hearts of major cities throughout the US, city populations were displaced over an ever-sprawling metropolitan area, and historic downtown city centers suffered dramatic population loss, leading to declining city revenues and chronic neglect. Faced with dwindling numbers of riders per square kilometer, transport operators suffered financial insolvency and were ultimately shut down, with minimal sustained support (or even direct opposition, in many cases) from federal and state governments that had, by then, solidified their alignment with automobile interests.

No longer able to compete in the car-centric realm that came to dominate this era, transport options over time continued to quietly dwindle throughout our cities, resulting in the dearth of urban and intercity transport options for riders and industries now faced today. 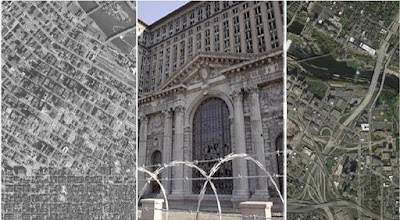 Breaking Out of the Status Quo

Meanwhile, there now exists an odd schism of environmental politics and power engineering principles that now confronts the electric power industry. As we continue the debate over how we ought to transform our “smart grid” into the “grid of the future,” a number of questions immediately comes to mind:
Betting on the grid continues to echo a complacent philosophy regarding the grid. The case for transmission has long been touted and speculated upon, and continues to drive large influxes of capital investment activities. Many utilities vulnerable from their generation business have looked to their transmission activities as a reliable “cash cow” to sustain their existing operations and growth strategies. With Enron (2001) slowly fading in the rear-view mirror, how similar is this collective sense of invulnerability that is now baked into our electric industry culture? Could other emerging threats, including emerging hijack and cybersecurity vulnerabilities, scare investors and customers away from this ongoing transmission binge?

As always, the fundamental question in our community is whether the assets comprising the modern power grid are being utilized (and compensated accordingly) to their fullest extent. Could transmission companies invest in transport, in order to hedge their bets against declines in customer load and grid utilization? Coupling the transport of power with people could revolutionize the world’s energy eco-system and accelerate our industry’s contributions to driving down greenhouse gas emissions on a broader scale worldwide. 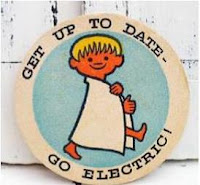 It is one goal of this proposal to assemble a cross-functional design team comprising a cross-section of electrical, electromagnetic, civil, mechanical, environmental, and safety/health experts. While technical details of this design have yet to be defined collaboratively, the overall design objective would be to marry the utilization of a common right-of-way for both high-speed rail (HSR) and EHV transmission, thus forming a robust “transport backbone” of a shared rail/power transmission system.

Naturally, the EHV system would power the high-speed train engines to propel passengers along the corridor. Electrostatic/-magnetic synergies could be achieved by utilizing stray electric field effects from the nearby EHV lines to “assist” with train propulsion; this would also mitigate stray/undesired electrostatic/-magnetic effects outside the ROW. Furthermore, the steel tracks for the rail line would provide an extremely solid ground source, dramatically improving voltage stability and reducing overvoltages from nearby switching or other system events.

With a dedicated freight rail line, bulky EHV transformers could be installed permanently on flatcars (similarly as road-based mobile transformer units), even while connected to the EHV system during normal (or standby) operation. This would provide a brand-new “analog” means for transmission operators to “slide” these assets dynamically along the corridors of the system to maximize their effectiveness at facilitating load allocation and voltage stability throughout this flexible “super-grid.”

This dynamic means of asset deployment would also eliminate supply chain/logistical “choke points” and greatly improve response time for stabilizing the system after large-scale system events, because manufacturing/shipping lead time for large power apparatuses could potentially be eliminated, with the provision of spare equipment that could be available on a standby basis at a nearby laydown/railyard facility.

Regular rail traffic among shared transmission line corridors could be leveraged indirectly as an ad-hoc means of network surveillance, as there are then many more “eyes on the ground” among commuters and utility maintenance personnel that could “see something, say something, do something!” in order to deter vandals and quickly alert authorities to imminent threats of hijacking and/or disruption.

Why the Electric Power Industry?

Our industry has the unique capability to deploy large amounts of capital decisively but also collaboratively with our community stakeholders. We could leverage its global community to assist in the technical design and development of this EHV/HSR concept, identify partners from the rail/transport industries with whom to develop this concept, establish the collaborative framework necessary to champion and sustain its execution, and help build the political support needed to make this concept a reality for our communities. 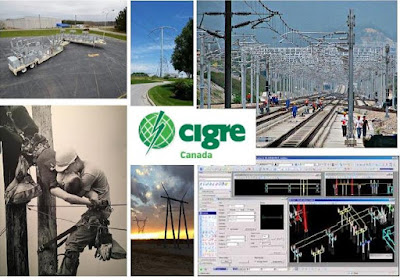 We cannot afford to continue faithfully waiting for dissonant and powerless governments around the world to act. While citizens and companies throughout Canada grow increasingly impatient for the federal government to execute (or even to propose) a bold vision to tackle these lingering greenhouse gas emissions, it is our responsibility as professional engineers in the electric power industry to take clear and decisive action on behalf of our communities, neighbors, and (grand-)children.

We could leverage the stability of our industry’s financial resources to provide sustained support and financing for executing large-scale projects on behalf of a vast array of stakeholders. A steady funding stream provides the baseline support and confidence necessary to competently drive projects, attract additional investors/partners, and ultimately sustain momentum and continuity with construction activity. When money runs out, the project halts. When the project halts, costs from delay rapidly accrue. Unfortunately, most past high-speed rail initiatives, thus far, have been paltry,
piecemeal, and uncoordinated – not to mention occasionally disrupted by firmly established adversaries entrenched with legacy auto/oil interests.

Our industry’s expertise with land/ROW acquisition would be extremely valuable to routing this future system. Working collaboratively with local communities and landowners – as we’ve always done – our industry could forge a robust alliance with local communities, inviting stakeholders to participate in this conversation to improve their regional economic activities, induce additional investment opportunities, and to keep an eye on the immediate construction impacts to their everyday lives, in order to minimize local opposition and NIMBY-ism and to ultimately respect these folks’ lands.

This concept defines a framework to forge an ambitious new “super-grid” that would not only continue serving our customers’ electric power transport needs reliably in a changing environment, but also to directly improve our customers’ everyday lives, by finally connecting people, places, and assets together with state-of-the-art transport on a unified electrified transport system.

All aboard the “Grid of the Future!”